Born in Mannheim as the youngest of five children to the Jewish merchant Michael Mayer-Mahr and his wife Clara (née Reiss) the family moved to Mainz on 17th January 1884. Moritz Mayer-Mahr received his first piano lessons in Mannheim. From 1886 to 1890 he studied composition with Woldemar Bargiel and piano with Ernst Rudolf at the Musikhochschule in Berlin. After completing his studies, he went on concert tours and performed as a soloist and in a trio with the violinist Alfred Wittenberg and the cellist Heinrich Grünfeld. He was an admirer of Ferruccio Busoni, whom he also knew personally. His repertoire mainly included classical and romantic works.

Educational activity played a central role in Mayer-Mahr’s life. From 1892 to 1937 he taught at the Klindworth-Scharwenka Conservatory in Berlin. From 1907 he was a member of the judges panel of the Ibach competition for young artists at the Stern Conservatory in Berlin and until 1933 a member of the Senate of the Akademie der Künste in Berlin as an expert in music education matters. Among his students were Manfred Gurlitt (1890-1973, composer and conductor), Róza Etkin (3rd prize at the International Frédéric Chopin Piano Competition in Warsaw 1927), Georg Bertram (pianist), Henry (Heinz) Jolles (pianist and composer), Lothar Olias (film and hit composer) and Erwin Bodky (pianist and composer). On his 60th birthday in 1929, he received an extensive donation which he used to support his students in the Mayer-Mahr-Foundation.

On 19th August 1935, Mayer-Mahr was expelled from the Reichsmusikkammer because of his Jewish origins. With the final rejection on 1st April 1936, an occupational ban (“Berufsverbot”) came into force. However, he was still allowed to teach foreign students and members of the Jüdischer Kulturbund. From January to mid-September 1938, Mayer-Mahr taught Ursula Reig, a former student of the Conservatory who was Spanish national, free of charge. Because Ursula Reig was considered an “Aryan”, the local musicians saw the class as a violation of the professional ban and demanded a fine of 10,000 RM. The Landesleitung of the Reichsmusikkammer (“state management”) judged this to be less severe and for its part imposed a fine of RM 1,000. On 8th December 1938, the proceedings were discontinued.

After a long break, Mayer-Mahr appeared again at a special event organized by the Kulturbund in February 1937, together with Leo Rostal (solo cellist of the Kulturbund orchestra) and Wladislaw Waghalter (concertmaster of the same orchestra). The trio played again in March 1938 for the Jüdische Winterhilfe (“Jewish Winter Aid”).

In 1940 Mayer-Mahr and his second wife Paula Mayer-Mahr (née Sternberg), received permission to leave Germany. The son Robert Mayer-Mahr from his first marriage, however, did not manage to escape. He was deported from Drancy in France to the Auschwitz concentration camp on 4th September 1942 and is considered missing. On 24th March 1940 Moritz and Paula Mayer-Mahr emigrated to Norway and lived in Vestre Aker (today Oslo). On 7th November 1942 they escaped to Sweden, but returned to Norway at an unknown date. On 8th January 1946 the couple returned to Sweden where he died on 30th July 1947 in Gøteborg. He was buried in the new Jewish cemetery there. 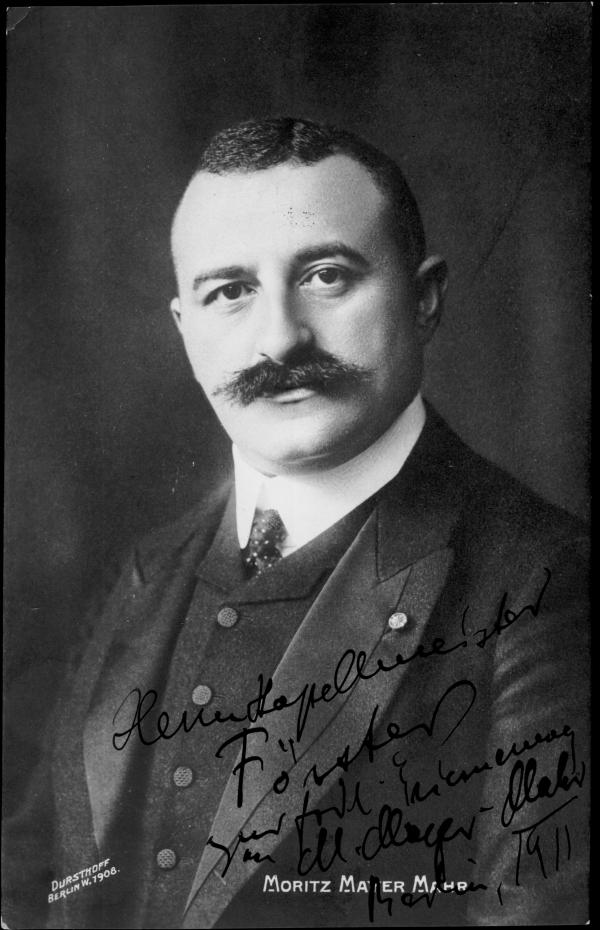 reference in Custodis "Music and Resistance"
detailed biography at LexM